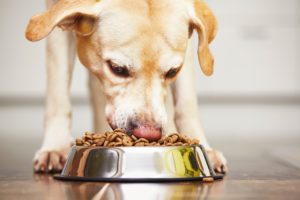 The FDA has recently issued a statement advising owners about potential risk for heart disease in dogs fed grain free diets. While grain free diets are of emerging concern, the importance of nutrition in maintaining healthy hearts is well-known.

In the 1980s, cats were being diagnosed with dilated cardiomyopathy (DCM), a condition involving poor heart pumping function which leads to back-up of fluid (congestive heart failure). These cats were ultimately found to have low blood levels of the amino acid taurine. Cats require taurine in their diet – it is an essential amino acid (meaning they are unable to adequately synthesize it from other precursor building blocks).

Once the link was made between diet and DCM in cats and appropriate modifications were made to the nutritional profiles of cat foods, DCM became rare in cats. It is not completely understood why taurine is so important for heart function, but it may relate to antioxidant effects, or the amount of calcium available within the heart muscle to help with contraction.

Initial studies in dogs failed to show the same dependence on taurine for heart function; however, subsequent studies suggested specific breeds of dogs including American and English Cocker Spaniels, Newfoundlands, Golden Retrievers, Labradors, Dalmatians, English Bulldogs, and Portuguese Water Dogs may be at risk for DCM that improves or resolves with taurine supplementation. Additionally, a link between lamb and rice diets was established. It is thought that the composition of those foods limits taurine absorption leading to deficiency, and a similar concern is now emerging for grain free diets.

While studies are ongoing and we still have a lot to learn about how grain free diets might affect heart function, it is worth considering switching your dog to a food that contains grains. If your dog was placed on a grain free diet for a medical reason, talk to your veterinarian about being screened for heart disease or supplementing taurine.

Dr. Block earned her veterinary degree from the University of California, Davis, School of Veterinary Medicine in 2013. Dr. Block completed a rotating internship followed by a cardiology residency at the University of Pennsylvania and joined Friendship Cardiology Specialists in 2017.

10 Strategies to Cope with Pet Loss at the Holidays

Losing your pet can feel devastating at any moment in the year. At the holidays, your grief can appear even greater as you try to...