Spaying your pet: Ovariectomy versus Ovariohysterectomy 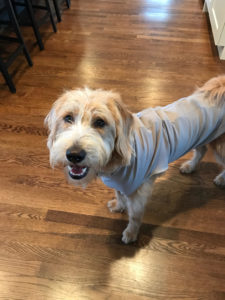 This sweet pup, Hazel, came to Friendship Hospital for Animals for a pre-surgical appointment in preparation for her spay procedure. A “spay” is a surgery to remove both ovaries which are the source of hormones responsible for estrus cycles in female dogs and cats. Hazel’s knowledgeable mom was well aware of the benefits to the procedure, such as controlling overpopulation and preventing diseases. However, most people are unaware of the different types of spay procedures available. When both ovaries are removed it is an ovariectomy surgery (OVE) versus when both ovaries AND the uterus are removed in a surgery it is a ovariohysterectomy (OVH).

Historically, in the United States and Canada ovariohysterectomies (OVH) were routinely performed, but ovariectomies (OVE) are becoming more common in the recent years.  On the other hand, ovariectomies have been standard procedure in Europe for decades.  One would think that uterine diseases could be better prevented with OVH as compared to OVE. However, uterine diseases do not occur without hormones produced by the ovaries, except for very rare tumors.  A study of dogs found that 85-90% of these rare uterine tumors are benign, so the risk of developing a malignant uterine tumor following OVE estimates to be approximately 0.003% (Findji, Ovariohysterectomy vs Ovariectomy, Clinician’s Brief, March 2014).

OVE is believed to create less surgical trauma as fewer intra-abdominal structures are involved; therefore, there may be fewer complications with OVE as compared to OVH. Additionally, incisions tend to be smaller, anesthesia and surgical times tend to be shorter, and postoperative pain tends to be less with OVE versus OVH. For these reasons, ovariectomies are the recommended spay technique for animals with a healthy uterus here at FHA.

Adorable Hazel is recovering well from her ovariectomy surgery. Now her family has been tasked with the difficult assignment to keep her calm for the post-operation period… good luck!

Dr. Schuyler Winstead Matthiesen was born and raised right here in the DC area. She has been a staff veterinarian since 2013, though her first FHA gig was as a veterinary technician. Dr. Matthiesen’s interests include endocrinology, preventative medicine and soft tissue surgery.