Blog ⁄ Friendship Hospital for Animals News ⁄ Is It Idiotic Not to Think About a Probiotic?

Is It Idiotic Not to Think About a Probiotic? 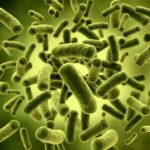 As I write this, I am still recovering from a bout of the stomach flu that I contracted after celebrating my daughter’s 5th birthday at an indoor bounce party.  The place was packed with kids, and I suspect I contracted a strain of the Norovirus.  The Norovirus likes to show up in crowded places like cruise ships and school systems.

As I contemplate my continued susceptibility to the various bugs that seem to surround the places that children congregate, I wonder what can I do to bolster my immune system?  And, why does it seem our immune systems are devolving to create children, like my son, who are allergic to common foods such as tree nuts and peanuts Astonishingly, from 1997 to 2008 the number of peanut allergies in children has more than tripled.

A lot is unknown, but we do know that allergies are mediated by the immune system. Apparently, a key to good health is a robust gut.  Did you know that 70% of our immune system lies in our intestinal tract?  The bacteria in our gut is what keeps our intestinal tract healthy.  Moreover, it is the diversity of bacteria and types of bacteria in our gut that promotes health and well-being.

A recent study illuminated in an article by NPR studied a tribe near the border of Venezuela and Brazil.  People in this tribe have 50% more diverse species of microbes in their gut than the average Westerner and have lower incidences of allergy and autoimmune diseases.  In the Western world, as our level of hygiene has evolved and our diet has changed, so have the bugs in our gut.  We no longer carry as diverse an array of gut microbes.  In fact, we have lost several dozen important species of microbes from our gut that used to play important roles in training our immune system, breaking down carbohydrates and behaving as prebiotics (substrates that promote bacterial health).

Although our improved hygiene has certainly paid off in terms of increased life expectancy and lowered infant mortality, our Western “tribe” has emerged with higher incidences of diseases stemming from a deranged immune system.  There is a rise in allergy, bowel diseases such as Chrohn’s and Celiac disease, autoimmune disorders, and multiple sclerosis.

In veterinary medicine we utilize many drugs to try to keep our pets feeling well.  We are now learning to reach for supplements as more research reveals their benefit for various illnesses and for bolstering health.  Probiotics are an emerging field in both the human and veterinary fields. Although they are already being utilized well for certain conditions, they may have more far reaching potential.

What are probitotics?  You’ve certainly heard something about them occurring naturally in yogurt or other foods purporting “live, active cultures” such as Kombucha drinks and miso soup.  Probiotics are live cultures of “good bacteria” that flourish in the gut and promote the health and vitality of other strains of “good bacteria”.

Many people like to spoon yogurt on top of dog food, hoping to pass on some of the probiotic benefits when their pet is experiencing gastrointestinal signs.  Unfortunately, did you know it can take cups worth of yogurt to provide the necessary concentrations of beneficial bacteria?  (Studies indicate that it takes between 1 billion to 10 billion live bacteria to provide benefit as a probiotic supplement.  A container of Activia yogurt eaten three times a day to a human will only provide 1 million bacteria).   Most probiotics are marketed as capsules or packets containing about one billion live bacteria (ie Align) and up to 450 billion bacteria/packet in a product like VSL-3.)

How are we using probiotics in veterinary medicine? Mainly, we are reaching for probiotics to combat diarrhea, both chronic and acute, in our patients.  Some veterinarians are also using probiotics to support the immune system in any animal that is stressed by disease or environmental conditions.  Some studies in humans support a stronger resistance to upper respiratory tract infections such as the common cold in people that regularly consume fermented foods.  Similarly, there is a rising use for probiotics is in cats that suffer from chronic herpes disease (which causes chronic upper respiratory and ocular signs).  Investigation is also underway to see if probiotics can mitigate symptoms of skin allergy in people.

Which probiotics are best? A study by Scott Weese, a prominent veterinary microbiologist, evaluated many different veterinary probiotics.  His study found that only two brands of fifteen evaluated met both the label claim for numbers of viable bacteria present and the type of bacteria claimed: Iam’s Prostora and Purina’s Fortiflora.   (FWIW: Friendship’s brand probiocin was not one of the total of 25 products evaluated in Scoot Weese’s study). Many concerning discrepancies, from percentage of viable organisms grown from the product compared to the label’s claim,  proper identification of organisms and whether grammatical errors were made identifying the organisms were noted in the 25 probiotics studied by Weese.  As a rule, probiotic supplements should always identify the strain of organism used, note the numbers of viable organisms in CFU’s (ideally aim for 1 billion or higher) and be stored properly either in sealed pouches or refrigerated to keep the product viable.

What are some novel uses for probiotics that are being investigated?  Studies are coming out that demonstrate a relationship between the strains of bacteria in your gut and your mental state of mind.  One interesting study took anxious mice and replaced their gut bacteria with bacteria from more gregarious and fearless mice.  The result:  the anxious mice became noticeably more outgoing and less anxious.  The same held true for when switching gut bacteria between bold and timid mice.  It is thought that the vagus nerve is a channel of communication between the gut bacteria and the brain.  Additionally, bacteria promote the production of various neurotransmitters which can talk to the brain.  There is hope in the future that probiotics may play a role in managing certain mental health conditions such as bipolar disorder.  Early studies have shown promise for reducing mania events in persons with bipolar disease.

Additional studies also demonstrate a possible use for probiotics in aiding weight loss and weight management.  A study by Nestle in Canada gave a group of women on a 12 week restricted calorie diet either a placebo pill or a probiotic pill containing lactobacillus (a common organism found in yogurt) in quantities that equated to one cup of yogurt per day.  The probiotic group lost almost two times more weight.   Furthermore, that group continued to lose weight after completing the diet (while maintaining the probiotic) versus the placebo group that plateaued with regards to their weight loss.  The probiotic group also had 25% less measurable leptin hormone, a hormone that influences appetite and metabolism.

I do not receive any benefit for promoting these products, but I do want to say that Iams Prostora, while expensive, is a highly palatable chew.  My favorite probiotic for cats remains Purina’s Fortiflora.  It comes in sealed daily pouches that are granules you sprinkle over food.  Most cats love the flavor: it’s hydrolyzed pork protein mixed with tiny beads of probiotic.  Thus, this supplement can be utilized for patients on a strict hypoallergenic diet (because the pork protein is hydrolyzed and evades detection by the immune system).

I don’t consider myself a health food fanatic, but this time I’m going to heed my own interesting research and start adding a probiotic to my daily vitamin routine!

Dr. Nicole Cohen graduated from veterinary school at the University of California, Davis in 2004 and went on to complete an internship in small animal medicine and surgery at Bay Area Veterinary Specialists in northern California.  Dr. Cohen joined Friendship in 2006 and works on both our Emergency & Critical Care and Primary Care departments.